This causal loop should be familiar to most game developers. 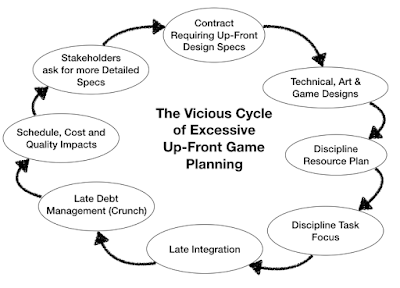 It's a vicious cycle because it builds upon itself, resulting in a negative feedback loop that adds crunch and increasingly impacts the schedule, cost and quality of a game.

Creating a positive feedback loop, or virtuous cycle, which reinforces practices that build towards improved schedule, cost and quality without requiring heroics, is a major reason for having a value and risk-mitigation ordered backlog and a definition of done that teams deliver on every iteration. 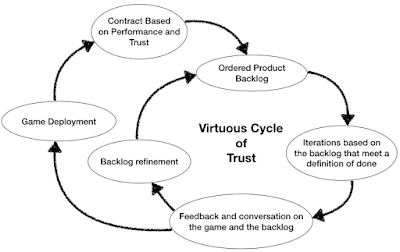 The obvious challenge is that you can't just start by asking your stakeholders to establish a relationship and contract built on trust. That has to be built. An even greater challenge is the internal studio challenge of operating with transparency and with a focus on outcome, rather than discipline output.

This is a core aspect of what a Scrum Master or Agile Coach does and is a major topic in the Advanced Certified Scrum Master for Video Games Workshop in June.

Posted by Clinton Keith at 9:58 AM