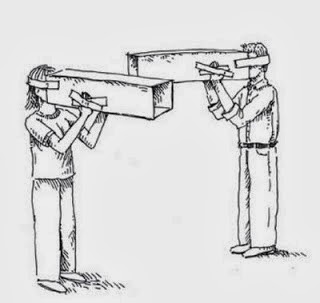 No vision is perfect, but sometimes the hardest person to convince of that is the visionary.  Given that a shipped game rarely resembles the original detailed design document, an equally detailed and prophetic vision buried inside someone’s head can be just as capricious. A common result is that the emergent gameplay quality is not taken into account and teams become disengaged.

I call this dysfunction “tunnel-vision” product ownership.  It’s common in studios transitioning from a design-document approach to an agile one.  Although the visionaries admit that detailed design documents fail to create a shared vision, they haven’t yet adopted an agile mindset which requires:
This leads to a major of pattern of dysfunction called:

Parts on the Garage Floor
The product backlog become a component list of features and functions that are necessary to fulfill the vision…someday.  This reminds me of someone building a prototype car, part-by-finished part.  They build a carburetor, then the tires, etc.   Eventually, when all the parts are built, an assembly phase is entered.  Even if all the parts fit together, it rarely results in a very functional car (check out how cars should be prototyped - http://wikispeed.org/the-car/).

The same thing happens on games.  The following practices are seen with the parts on the garage floor dysfunction
This is not to say that component teams are all bad.  Often they are necessary, but when a majority of a project is composed of component teams, it usually results in delayed integration and knowledge (i.e. debt).
Addressing Tunnel Vision
As with any cultural issue, tunnel vision is hard to fix.  Transforming a detailed-design-document focused culture to one of frequent communication and inspection doesn’t happen overnight.  There needs to be some bridgework between the two.  Before the documents are shrunk, the product owner needs to gain skill in communicating vision and in learning to respond to the emergent game.  To start with, I’ll find ways to improve communication in sprint planning, reviews and retrospectives.  Establishing a better definition of done, and phrasing the sprint goal in terms of true value (e.g. “what are we going to be able to play at the end of the sprint”) sets the context for what is expected (in the playable game).  Focusing the sprint review on the state of the gameplay sends that message as well.  For the team, it’s easier: having a product owner responding to gameplay communicates priorities.
For the product owner, it’s more challenging.  I encourage ScrumMasters to be diligent in asking the appropriate questions of the Product Owner in planning and review:
These are questions for the entire team.  Discussing them as a group is very beneficial in supporting a shared vision.  Keep in mind the product owner will still own the final decision about the product backlog priorities.

It’s better to have a vision than none at all, but a vision must be tempered with reality.

Posted by Clinton Keith at 1:19 PM