When visiting a studio, I'll often ask to observe the daily stand-ups meetings.  It's the best way to sense where a team is and how to focus coaching time for the visit.  An effective daily stand-up meeting is an energetic swarm of committed team members that need to quickly synchronize their efforts and identify anything that is threatening their shared goal.

Some daily stand-ups (or daily scrums), aren't like this.  They are monotonous, manager-led and pointless to the attendees.  Teams here lack any sense of commitment or ownership and they eventually question the merit of the practice and perhaps even abandon it.  Unfortunately, abandoning the stand-up doesn't improve their chances of building commitment or ownership, which are principles of Scrum.  So I've compiled a list of pointers on ways to improve the daily stand-up meeting and improve commitment and ownership.


The stand-up is for the team.  This meeting is for the team to synchronize their efforts towards achieving their goal, not just as a status report.  If their are any "management artifacts" that need to be created (such as an update to a tracking tool), it should be done outside the meeting.

The rules aren't fixed.  The "answer the three questions" rule you read about in books is only the starting place.  Teams add questions, change the format, and do anything necessary to address their needs.

It's about the commitment to the goal, not just the tasks.  Task tracking is critical, but work will arise on a daily basis that wasn't considered during sprint planning.  Teams need to react to this new work and balance it daily against their goal.  They need to inform each other about new developments and threats to their goal.  They should care about accomplishing the tasks, but they should care about the goal more.

The ScrumMaster must know their role.  ScrumMasters do not run the daily stand-up.  They facilitate them.  The difference is that the rules for the stand-up come from the team and the ScrumMaster ensures that those rules are followed.  If the team has decided that being late to the stand-up is not acceptable, they'll likely have a rule in place to chastise those who are late.  Paying $1 or singing a song is common.  ScrumMasters must not let them off the hook.

It's a "stand-up" meeting.  If you took the same meeting and had everyone sit down, its duration would increase by 50%.  Standing creates a sense of urgency.   Try making another meeting "standing only" and see what happens!

Respect the time-box.  Some of the most effective stand-ups I've seen were five-minute "hurricanes of energy and activity".  The team shared what they needed to share and went back to work.  Stand-ups that take longer than 15 minutes are just wrong and need to be fixed.

Prefer a physical task board.  This is not always possible to have, but here is no electronic replacement that is equivalent.  A physical task board with cards allows everyone on the team to handle the tasks simultaneously at the same location.  It encourages team ownership.

Avoid projectors.  This might seem a bit redundant given the last point, but projectors used in a stand-up meeting should be renamed "conversation killers".  Projectors usually involve a software tool that provides information in a linear, one-at-a-time way with someone, unfortunately often the ScrumMaster, at the keyboard/mouse controls.  If defeats the non-linear, swarming-on-the-goal, value of the stand-up.  Software tools are often a critical part of project planning and tracking, but they have no place in a co-located daily stand-up.

Prefer stand-ups in the team workspace.  The ideal stand-ups are around a task board in the team's working area.  It reduces the amount of time walking to a war room and allows the team to have the task board near them all day.  This is not possible with distributed teams, but helps collocated ones.

It's owned by the team.  The team picks the format and time of day of the daily stand-up.  Since they own it, it should run the same way, regardless of whether the ScrumMaster is there or not.  One simple test I recommend to ScrumMasters is to occasionally hide around the time of the daily scrum and see what happens.  If the team meets and runs the stand-up the same way as when you are their, you are doing a good job.  If they don't meet or stand around wondering what to do, they have some things to fix.
Posted by Clinton Keith at 9:44 AM No comments:

My courses and workshops, use  exercises, discussions and simulations to help attendees embrace the principles of Scrum and Kanban.  The simulations are among the most challenging to create.  Finding the best way to--for example--simulate a sprint in 15 minutes to creative game developers is not easy.  So I try variations of games other trainers use and invent some of my own.

Over the past six months, one simulation I've used is called Movements of a Hypnotic Nature (see slide 14 for more details).  Good things were said about it, so I tried it.  The simulation requires play-doh, golf balls, string, straws, etc: lots of interesting things used to build a simple product that  moves and has an aesthetic quality.

There were two problems with this simulation.  The first is that the connection between the simulation and Scrum can be a bit nebulous.  It's not a bad simulation, but I've found better ones (e.g. some based on Legos).  The second is traveling with all this stuff.  It adds a lot of weight and recently when I was packing, I noticed that the pay-doh, timers (used for time-boxing the simulation) and wires for all the gadgets I carry happened to pile-up in a  disturbing configuration: 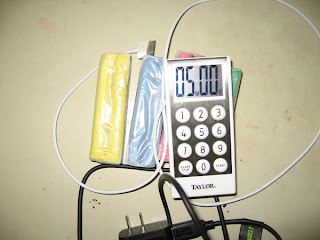 Airline security is enough of a hassle right now without this being seen by a baggage inspector.  Sorry future workshop attendees, but play-doh based Scrum simulations are now off the menu!
Posted by Clinton Keith at 11:38 AM No comments: