The manifesto for agile game development

I've modified them slightly to better fit game development.
----
We are uncovering better ways of developing games by doing it and helping others do it. Through this work we have come to value:
That is, while there is value in the items on the right, we value the items on the left more.

The principles behind the Agile Manifesto:

The studios I visit that have the most success employing agile have something in common.  There is often a champion of the effort to become more agile who has a position of authority there.

Some of the things I have noticed about them are:
Although this role isn't defined as part of an agile process, it is often is a valued one.   Lately I came across the description of a role called the "Agile Manager" in a great book by Lyssa Adkins called "Coaching Agile Teams".   In the book, she writes that an agile manager's role is
The agile manager is like water--patiently, water can carve away the hardest surface, and it will always find a way to flow.  Making things flow so the team delivers again and again is an honorable (and challenging) job.  In so doing, agile managers offer their highest service to the team. "

While this role isn't unconditionally necessary for success in all cases, it is for teams that don't have the authority to overcome organizational inertia that can prevent a team from becoming agile.
Posted by Clinton Keith at 9:57 AM 4 comments:

Someone posted the slide deck from Epic's presentation made at a GDC tutorial a few years back.  It's brief, but it was a good presentation.
Posted by Clinton Keith at 8:29 AM No comments: 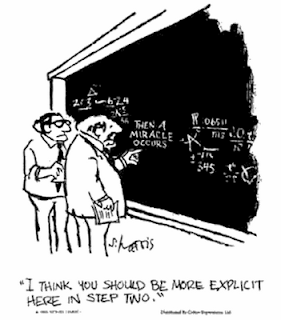 It's important for the product owner to understand risk and use it to prioritize the backlog. They are responsible for the direction of the project outside the sprints.  They have their hands on the steering wheel of the project and need to steer it in the right direction.
Posted by Clinton Keith at 8:59 AM 1 comment:

An iterative and incremental scale graph

The phrase "iterative and incremental" development is tossed around quite a bit without much distinction between the two.  The distinction is important for large-scale games (the kind shipped on discs).  In talks over the past few years I've shown a table that compares the differences, but on a recent flight I came up with a more graphical way to express the differences.

For such large games, there are usuall several phases of development that can't be blended perfectly even under an agile framework.  Theses are:
In an ideal agile project, all of these activities are mixed equally.  For such games, this proves to be impractical.  For example, if you change the jump height of the player on a platformer in the middle of level production, you may need to redo hundreds of ledges that baked in that height.  An "agilist" would recommend that you make all your ledges procedural so that you can continue to tune them, but this is often not a practical or cost effective solution.  We have to make decisions before production starts.

So here is the graph I jotted down (I love Omnisketch on the iPad): 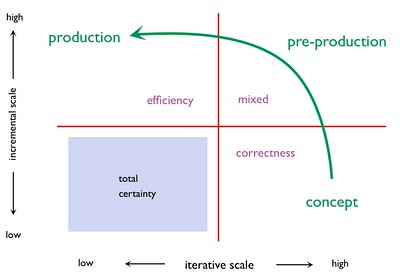 What this communicates is the flow of development (the green line) from concept, through pre-production into production.  This flow can be for the entire game or a class of assets (such as levels).  The goals for the team and stakeholders moves from "correctness" (making the right game or asset) to that of "efficiency" (making it as low cost as possible).   Each goal guides how we do the work, either using spikes in concept development, Scrum in pre-production, or mixing in lean practices such as kanban in production.

The blue box in the lower left represents "total certainly" in our requirements and technology, which is fine if your mass-producing widgets, but is never a state we're in making games.

I find this useful in explaining that the work chooses the methods, not the other way around.
Posted by Clinton Keith at 9:49 AM No comments: